The scenarios chosen for the circulation of our both institutional and non institutional projects and artworks are not chosen by chance but on purpose, since those scenarios are an essential part of our projects, as we try to analyze their structures, relations, and functions.

We believe in the constructiveness of the action of re-thinking the space in which art happens. We live in a specific time and space, and we act accordingly.

Our mode of production is diverse. Generally we make actions that lead into objects, installations, public interventions, or curatorial projects. The appearance of the artwork should collaborate or enhance its intensity, but it is not a goal in itself.

Our artworks, methods, mechanisms and discourses may have already been used, but using what has already been produced, boosts the future construction. Similar answers can be used to solve different problems.

We usually work with other people involved in the “Arts field”, since we believe that collaboration amongst peers is valuable and the construction collectiveness is primordial.
Interference as an action which alters a normal course that can later return or not to its original position, is a process that allows us to transform and evaluate events. 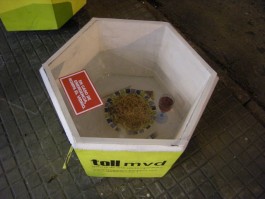