Lecture on the Usological Turn in Collective Thought: “Usership 3.0 “

Stephen Wright is a Paris-based art writer and teaches the practice of theory at the European School of Visual Arts (eesi.eu). His writing has focused primarily on the politics of usership, particularly in contexts of collaborative, extradisciplinary practices with variable coefficients of art. His current research seeks to understand the ongoing usological turn in art and society in terms of contemporary escapological theory and practice. In 2004, he curated The Future of the Reciprocal Readymade (Apexart, New York), in 2005 In Absentia (Passerelle, Brest), in 2006 Rumour as Media (Aksanat,
Istanbul) and Dataesthetics (WHW, Zagreb), and is currently preparing, amongst other projects, Withdrawal: The Performative Document (New York) as part of a series of exhibitions examining art practices with low coefficients of artistic visibility, which raise the prospect of art without artworks, authorship or spectatorship.
He is founding user of the collective blog n.e.w.s., northeastwestsouth.net.
Born in 1963 in Vancouver, Canada, he lives and works in Paris 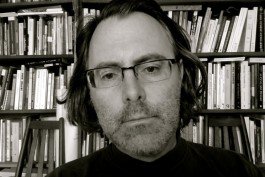